Peter was born in London, England and grew up in the United States. He worked as a news correspondent for the U.S. Army and after his honorable discharge moved to Quebec, Canada where he lived until 2005. He developed a growing interest in foraging after seeing how lush the forests were in southwestern Ontario and how they are home to countless varieties of edible plants and mushrooms. Every year new edible plants and wild mushrooms are discovered and he passes this knowledge along to those who accompany him and his dogs on the trails.

On another note: In April 2012, his mystery novel, Boreal Dreams, was published to four and five star reviews. Boreal Dreams was also short listed for the Robertson Davies Prize. He is currently working on his second book, The Art and Happenstance of Foraging, due out later this year.

Puck's Plenty was co-winner along with Karen Hartwick of Stratford Tea Leaves for Best Beverage at the 2012 and 2013 Savour Stratford Culinary Festival .

The name, Puck's Plenty, was derived from Puck, a character in the play, A Midsummer's Night Dream by William Shakespeare, our own tribute to Stratford's world renowned Shakespeare Festival. 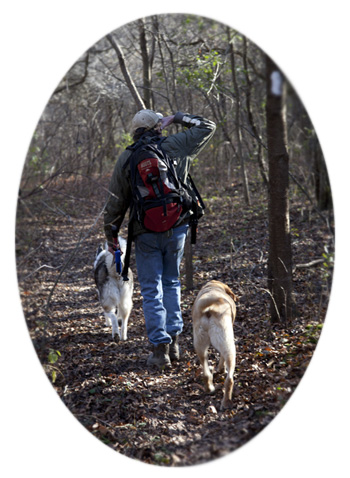 Faolan, Peter & Liam on the trail.